These Dragons have only appeared in one film and one video game so far.

The Dragon appeared for the first time in the 2002 film Reign of Fire where they served as the main antagonists, and especially the Male Dragon.

The Dragon appeared for the second and last time in the video game adaptation of the film, Reign of Fire. Unlike in the film, in the game you can choose dragons to be the antagonists as you're playing as dragon slayers, or play as a dragon from a protagonist view, where the humans are the antagonists.

The dragons in Reign of Fire are large four limbed creatures with two glands in their mouth capable of producing two liquids that, when combined and exposed to the open air, ignite into a form of napalm. The liquid these glands produces also seems to have the potential to harm the eyes of any human it comes into contact with (Quinn has the liquid washed out with water as soon as he sees his mother).

It appears that the species survives by living on ash and feeding on all life it comes in contact with (We don't know if Marine life was destroyed as well).

The film is quite difficult in coming up with hypothesis as to how they truly function however as at the start the male is awakened and suddenly the planet is overrun with females as well, suggesting that the male can produce offspring as well but after doing so will allow the females to carry on spreading his genes.

Furthermore, since a male dragon existed, the species must have a way to produce males that the characters and thus the audience as well didn't know of. Which means the dragons might not be extinct at the end of the movie.

Once they have killed everything it is unknown as to how long it will be until the male is forced into hibernation once more (Maybe not if he is able to continue feeding on females but we do know he was hibernating after the dinosaurs.)

In order for the dragon to be awakened it apparently must be found and woken, we can conclude this by looking at how much life there was between the dinosaurs and modern humanity.

One weakness the dragons have is to their vision at dawn, they have excellent vision during the day and even better vision at night but seem impaired enough at dawn to make fatal mistakes that they would not usually make.

The Dragons in Reign of Fire were around with the dinosaurs, the apparent cause of their extinction after which the male went into hibernation until woken, this implies that the male is capable of living for a very, very large amount of time or is biologically immortal (Unless obviously killed).

The Male may be larger than the females in order to prevent him from being overpowered by hungry or angry females, as he is obviously the only chance of the species preservation.

When a mother dragon lays her eggs, she tends to choose anything like a protective man made structure, like a fort for example, to build a nest and lay her eggs. It was once discovered that three female dragons had their nests inside a sea fort at the same time. The nests are protected by a large brood of dragons circulating and moving inside the nesting area, though if anything or anyone tries to get too close to a nest with eggs, the mother will become very violent, protective, and will panic as it breaths streams of fire against the intruders and flaps violently with it's big wings (video game).

In every Dragon colony, there is only one huge male which mates with several smaller females.

Dragons, while hunting, tends to burn their prey and eat the ashes.

It was discovered that the Dragons can turn to cannibalism and eats each other when food sources are scarce. During a starvation era, the giant Male Dragon is the dominant predator, the only creature that has no fear and is feared by other Dragons.

The egg of a dragon has a rather red/orange transparent colour and is about 1.5x0.7 feet.

It is confirmed, both through Medieval tales and modern observations, that dragons can breath fire. The fire breath is the dragon's primary weapon and very effective and can be extremely devastating. They produce this flame via chemicals produced in two glands in the back their mouths on either side of their tongues that when mixed together proves highly combustible.

Napalm breath is a powerful close range weapon or defense which gives dragons a good upper hand in close encounters with prey or with rivals. The napalm breath shoots out a straight stream of fire extremely fast which can be devastating at close range but isn't as effective to use against long range targets. (video game?)

Fireballs are a kind of weapon which unlike napalm breath can be used against both close range and long range targets. It is a ball of fire which shoots out of the dragon's mouth very fast and explodes in flames when the target is hit. (video game)

The flight pattern of dragons is currently unknown and needs further investigation, and how the dragons are even able to fly is also a mystery.

When the first modern day Dragon was discovered, it was clear that it had been in a dormant state, it is possible that this species can go into hibernation underground, maybe in a way or attempt of preserving the species. Though it is currently unknown how the Male Dragon could have survived down there in Underground London, and for how long it's been there.

It appears that Dragons are a highly evolved and highly intelligent species of reptile. From the behaviours of the animals to judge, it appears that their level of intelligence is rather high, making it more understandable how they could outnumber mankind so effectively, though the fire might have had a bigger part in the story, but adding intelligence makes this creature into the ultimate killing machine.

The evolution of the Dragons still has many questions that needs to be answered. There are still mysteries and things we don't know about this magnificent animal species.

The Dragon existed long before and coexisted with the dinosaurs and they are also the reason dinosaurs are now extinct. What the prehistoric dragons actually looked like is yet unknown, though it is possible that they haven't changed that much for all those millions of years they have been in existence, and they might have looked very much like they do today.

Modern man first encountered the Dragon species around the Viking Age and the Middle Ages as many were slaughtered by Vikings and Knights.

The Dragons were rediscovered in 2008 when a young boy named Quinn Abercromby investigated the tunnels during the construction of Underground London, and as he climbed into a cave which the workers had discovered, it was discovered that the cave was inhabited by a huge hibernating Dragon. This is the Male Dragon. When it awoke, it incinerated all the workers during its escape to the surface. After that, the dragons quickly took over the world.

One fan theory states that the male dragon went around to all the dragon eggs left by the females before they died, the eggs still alive, and fertilized them. As all of the eggs hatched at once, this could explain why the dragon population spiked so rapidly so suddenly.

In 2020, as a small force of surviving humans, and dragon slayers, invade the Dragon infested London, they try for several times to slay The Dragon Male (which is the origin of all Dragons and the only hope for their species' survival), yet fails. During their last attempt to slay the Dragon they succeed as Quinn Abercromby (the first modern day person to come face to face with the first Dragon, the Male Dragon, back in 1999) shoots an arrow with napalm inside the dragon's mouth making it explode from inside, which might have marked the end of it's species.

It is yet unknown whether some dragon(s) might have survived and might bring the population back in shape in the future but it is entirely possible considering that a male was born at some point which means the species carries the potential to birth males.

The only thing that is for sure is that the death of the male dragon had a huge impact on the species since the main cast didn't see any of them in three month afterwards.

The case of these dragons might be similar to the Indian jumping ants, a species of ant in which the queen emits chemicals to keep its children sterile. When the queen dies, the females, freed of the effects of the chemicals, fight for dominance. Such a behaviour can explain why no dragons have been seen after the death of the male, they might have been fighting to become the next male.

The dragons in Reign of Fire more so resemble wyverns than dragons, as they have a pair of 2 back legs, and their fore legs are part of their wings. Dragons on the other hand have two pairs of legs, plus wings.

The creatures in Reign of Fire are still referred to as dragons despite this. [Citation Needed] 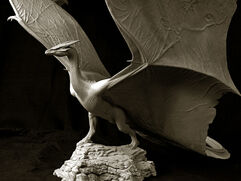 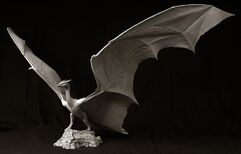 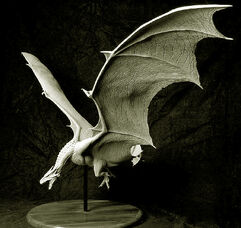 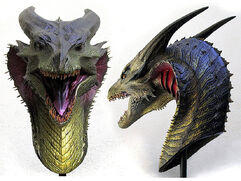 Model of the head of a Dragon. 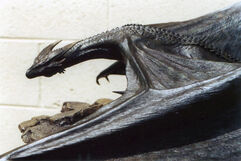 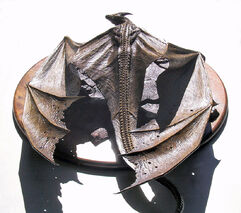 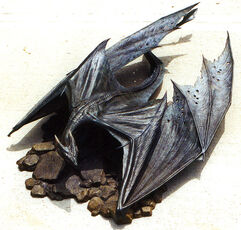 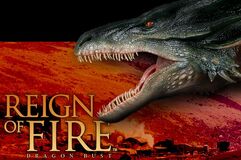 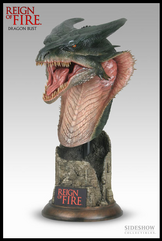 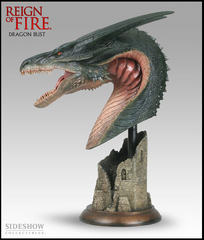 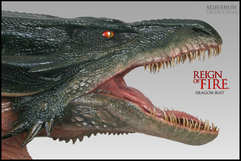 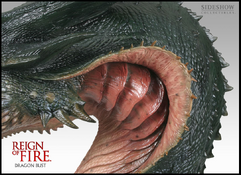 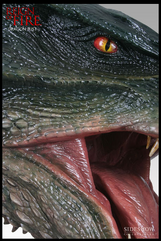 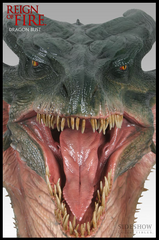 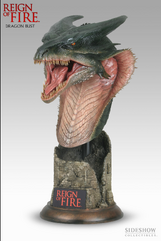 Dragons from the film "Reign of Fire".

Dragons from the film "Reign of Fire". 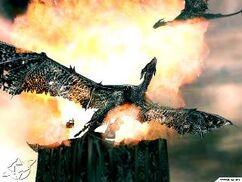 Dragon females from the video game "Reign of Fire". 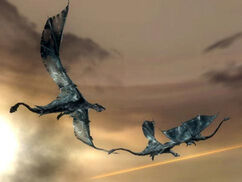 Dragon females from the video game "Reign of Fire".
Community content is available under CC-BY-SA unless otherwise noted.
Advertisement